We’ve had the same couch in our living room for a long, long, time. It’s gotten so worn out that there’s a permanent dent where my butt goes and the wooden frame pushes into my back every time I recline in it. The poor thing is permanently bent at an angle on one end and the material looks like a shirt that’s been through the wash one too many times. Furniture shopping time!

We started out at the local furniture store looking at couches that were similar to the one we needed to replace. We like having recliners on each end and cup holders are nice. My parents had recently picked up a unit with power recliners and built-in USB ports that we really liked.

One might think that power recliners are just for lazy people; how hard can it be to pull a handle? The thing is, they can do some things that other seating just can’t. Power recliners can maintain any position your heart desires. Wherever you let go of the button is where they stay. For me, this is especially nice on the foot rest. Traditional reclining furniture usually has two foot positions, up or down. Having my feet fully up while sitting puts stress on my hip joints and lower back because they are almost always a too high of an angle for my build. Being fully reclined makes it difficult to watch TV or play a game. These are some serious first-world problems people!

So, power reclining is a requirement for us and you would think there’d be limited choices in the category, but you would be wrong. Apparently while I was working on digging a deeper butt hole in my old couch, the whole furniture world decided to make power everything. Guess we’ll have to pick the old fashioned way; by sitting on a bunch of them.

My wife and I tried out literarily hundreds, possibly thousands, of couches and chairs in a multitude of different stores. Aesthetics aside, we figured out some key features that make a big difference in comfort. First, a power headrest is important; much like power windows in a car, you can get a couch or recliner without the option but the savings aren’t worth it in the end. The power headrest allows you to prop your head and shoulders up for the perfect viewing angle, no matter how far you lay back. 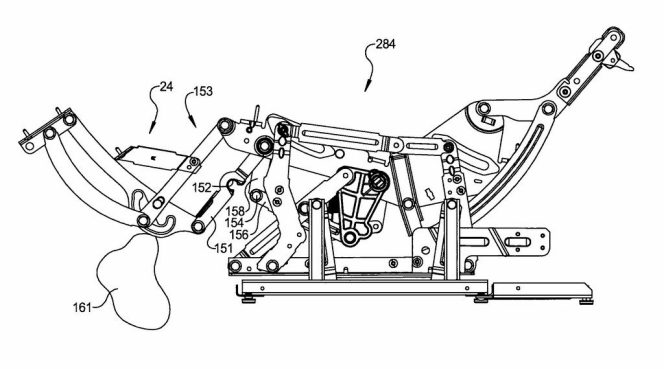 The ability to move the back separate from the footrest also dramatically improves comfort. Being able to get your perfect pelvis angle while sitting, removes stress points. Unfortunately this option is both rare and expensive. Out of the countless examples that we looked at, only a handful had it and most were well over $1300.00 for a single chair. We didn’t find any couches with the option at all.

Most of the power reclining furniture will raise the legs until they reach their maximum height and then the back will lower or vice versa; the two parts are connected via their movement mechanism. This is still better than the old fashioned pull a handle solution but, if you have the funds I suggest you try the indpendant movement before going this route. It’s uncomfortable for me to sit up-right with my legs fully extended and either power recliner configuration will fix this, you can put the legs at any angle that you like. Being able to get the same adjustability on the back is like having  steering wheel that tilts and telesopes; it provides a slightly better fit.

While looking at and testing all of these furniture pieces we both came to the realization that a couch wasn’t what we wanted at all. While they are the more traditional living room seating option, they have a lot of issues for us. Their footprint is too large given the seating surface, they are difficult to arrange in many rooms, and somebody always ends up with a worse view of the TV. We decided to go with two chairs and end-tables in between each.

Now that our list was narrowed down; power reclining chairs with seperate back and footrest mechanisms along with a power headrest our choices were pretty limited. Especially with regard to our budget. We really liked the Lazy Boy Morrison PowerReclineXR but at the time it was almost $1400. It was easily the most comfortable chair either of us have ever sat in but was out of our price range. We ended up finding it at our local Nebraska Furniture Mart for $749.00, the catch was that it only came in one color. Luckily we both liked the indigo fabric. Normally, I would provide you with a link to their site but it currently isn’t listed; the closest thing they have right now is the manual version of the same chair. 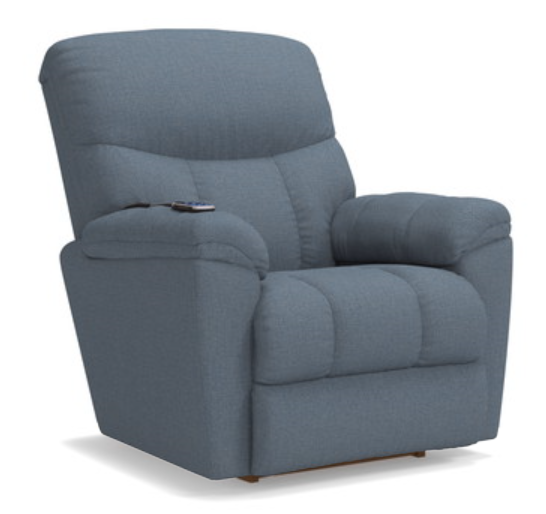 We’ve had them in our home for more than a month now and couldn’t be happier. The chairs are a major uprade in comfort. Being able to slightly move your back, feet, head, and lumbar at any point you feel stress is a huge advantage over traditional seating. Remember when you first sat in a car with power seats and could adjust them just right? It’s like that but more cushy and with a footrest.

These chairs do not have cup holders or USB ports but our end-tables do. We had planned on getting end-tables to fill in the gaps between the chairs so why shouldn’t they be of the hi-tech variety? Again we spent several days looking on-line and in stores before we found the right pieces for our room. We ended up going with Laflorn Chair Side Tables from Ashley Furniture. They have built-in cup holders, power strips, and usb charging, along with closed in storage for all our controllers, game disks, and books. Several furniture stores carry a version of them but we found the best deal on Amazon.

I never expected to write a piece about furniture on my tech blog. It just goes to show you how far technology has infiltrated our daily lives when chairs have controllers and motors and end-tables can charge your laptop and your phone. I predict that in the near future we’ll see smart chairs that automatically adjust to your body position and tables that wirelessley charge your devices while they back them up to the cloud.