Not long ago I jumped on the IoT bandwagon and installed a Ring doorbell. I was surprised by how much peace of mind the thing provides. Getting a notification when somebody approaches my house, a doorbell that not only chimes but beeps my phone, and being able to tell salespeople that I’m not interested without getting off the couch are game changers in everyday life. Knowing that the UPS man dropped off my package on the porch and being able to keep an eye on it until someone gets home is just great, too.

These high-tech super powers of observation got me thinking that it would be awesome to keep an eye on the inside of my home too. I know there are several systems on the market that facilitate putting multiple cameras throughout your home and connecting them to a controller that monitors, records, and provides control over the camera network. Nightowl offers systems that are both wired and wireless with multiple cameras, indoor and outdoor options, and more. I wasn’t interested in having a system like that in my house though. My family and I think that having cameras staring us 24/7 would be creepy. My goal isn’t to spy on people. It’s to see what’s going on in my home when nobody is there.

I have experience with several models of office bots. You place an iPad or other tablet into them and then connect with 2 way video software to drive yourself around and talk to people (think Facetime on wheels). A couple of the companies that I’ve worked for have had these devices for employees that work from home or remote offices. They are surprisingly effective after everyone gets used to them. There are a couple of problems for my use case though; they are too expensive and just flat-out overkill. I like the idea of a camera I can pilot throughout my home but it doesn’t need to show my face. My home has several different floor surfaces; shag carpet, tile, and various rugs, made me think that the option 3 might get around a little easier. Tracks offer excellent traction and weight dispersal. There’s a reason why tanks use them right? So I ordered the Appbot Riley from Amazon.

It had several features that I was interested in without being total overkill. The little bot has: 720P streaming video, a rotating docking station, automatic docking and undocking, a motion detector, IR night vision, picture and video recording (to your phone), face tracking, two-way audio, a tilt camera mount, and automatic self-righting.

We’ve had the robot (we named it Robby) in our home for a couple of months now. I’ve been happy with it overall, there are only two things bug me. When you pilot it at full speed it tends to turn left. There’s a sweet-spot at which you can drive forward at around 70% of the full speed and stay straight. The other is, every time you switch out of the app to say, check a text message, you have to go through the log on process all over again.

When the little guy is on its dock you can use it like a 360 pan/tilt security camera, the dock is motorized and spins while the “head” tilts up and down. We’ve strategically placed it so that its easy to see the front and rear doors without undocking. If we want to see what our dog is up to we just hit the undock button and the app bot orients itself and then backs out of the dock ready to go. When you’re done driving you only need to get it close to the dock (where the camera can see it) and then hit the dock button. It will position itself and start charging all on its own.

You see what the camera sees from the app on your phone and drive with virtual control sticks much like those in any FPS game that you’ve every tried on your smart phone. The controls are simple and the app works great on my Galaxy Note 8 and iPhone 8. It also works on my wife’s iPad. There isn’t a Windows or Linux app for it yet but the developer has mentioned they are considering creating one. 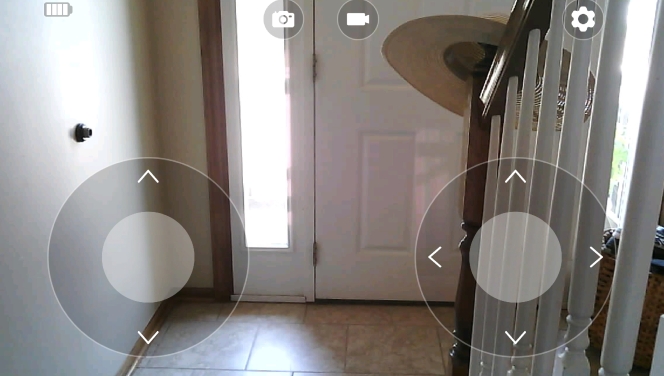 The bot connects to your wi-fi and then to cloud servers hosted by the manufacturer. Your mobile connects to the servers (not the bot directly) so you can use it anywhere that you have an internet connection. I’ve even tested turning off my LTE and was able to pilot it just fine on plain old 4g, although there is some lag and the picture quality degrades at this low-bandwidth.

We’ve traveled away from home a couple of times since setting up Robby and its nice to be able to check the outside of our home through the ring and then take a look inside to check the doors and windows. Once again, I find myself shocked at how much worry it relieves to be able to see that nothing is wrong, I didn’t leave the stove on, and just generally check things out. My son has a pet lizard that almost always stays home, but Gizmo’s tank is on a stand that is fairly high up and difficult to see from the floor. No problem, I just leaned a piece of cardboard up against the stand at a 45 degree angle and Robby can drive right up it to see in the tank. It’s night vision makes it easy to see the bearded dragon holed-up in its den and make sure she’s doing well.

I’ve used it to prank the wife a few times, we’ve checked on the kids when we’ve left them home alone. My dog is slowly getting used to it. At first she’d bark her fool head off when Robby undocked and started moving but now she just gives it the stink eye. It still freaks her out if we talk to her through it, though. It’s night vision and low profile makes it great for looking under beds for lost items.

My mom thought of another excellent use for it. If you have a loved one that isn’t quite fully independent it would be a great way to keep tabs on them. I wish it would have existed when my grandmother lived in her assisted living home. It would have been nice to have had the ability to check on her more often. It would also be great to leave in a vacation property or RV. 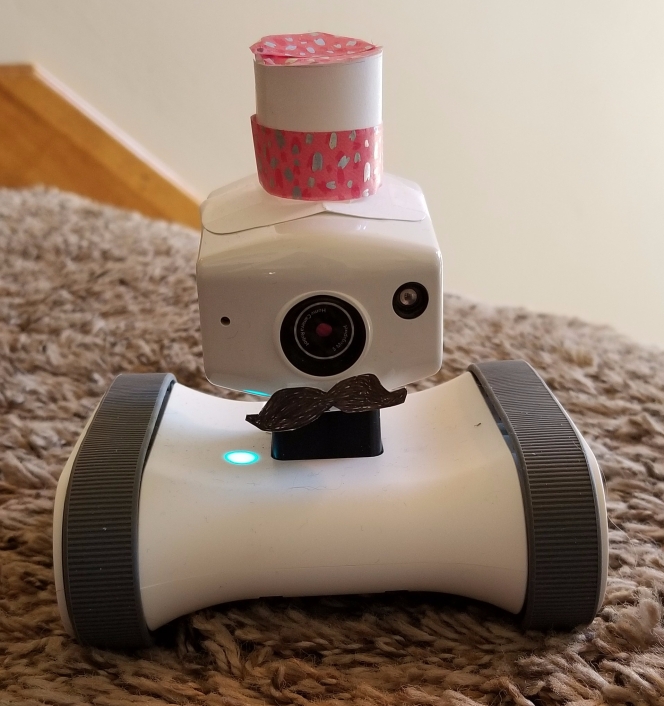